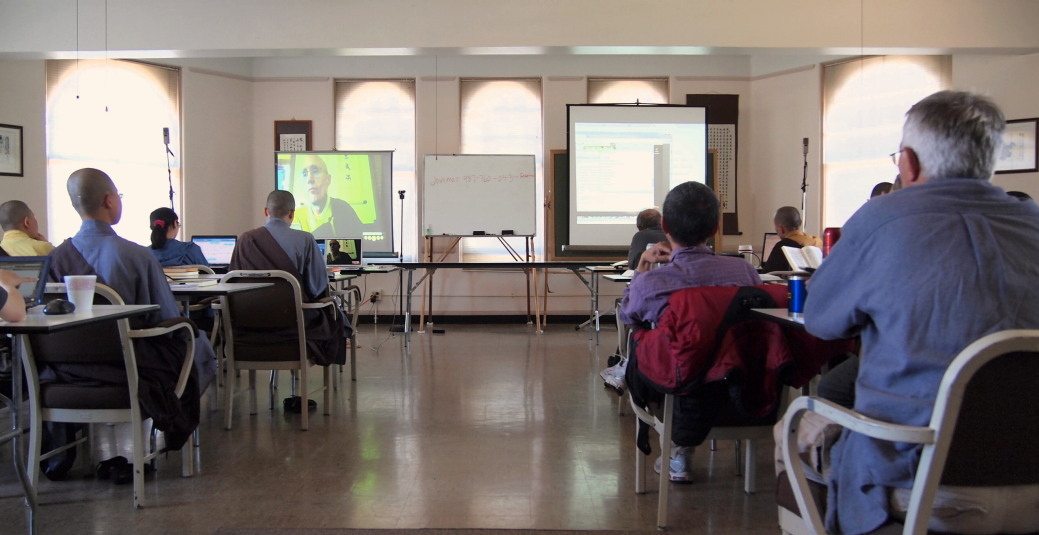 Avatamsaka English translation group was set up on March, 7, 2011. Led by Dharma Master Sure and under normal circumstances, we meet each Monday morning to do the translation. The translation work attracted many dedicated people to come to participate.  Besides the participants from the City of Ten Thousand Buddhas, there are other people from other places, such as the Bay Area of Oakland, San Francisco, Berkeley, as well as from L.A., Canada, up to and including Britain, the Netherlands, and Taiwan, who participated through calling in via Skype.  Every time there was a translation going on, the participation and discussion via Skype was as equally enthusiastic as on the translation floor. 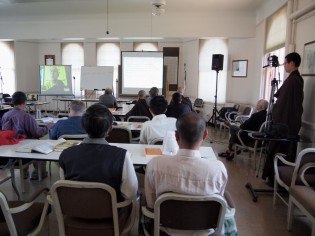 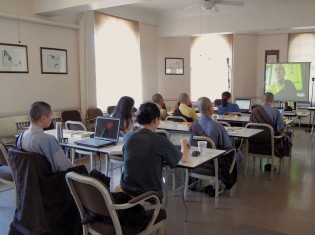 Last May, because the City had the of Ten Thousand Buddhas Repentance lasting for twenty-three days, out of consideration for people’s cultivation, the translation meeting time was changed to early morning at 5:00 AM, which was right after the Morning Ceremony. By doing so, we provided an opportunity for people to attend the ceremony, and also to allow the translation efforts to be continued. At the end of May, DM Sure led the DRBU delegation to Taiwan for a three-week visitation. Since we were still in the beginning stage of doing the translation, and people’ morale is the highest, its suspension would have slackened the morale and scattered the people. Therefore despite the toil, fatigue, and hardship, Dharma Master Sure continued to host the translation through Skyping-in from Taiwan. Thanks to the modern technology, we were able to see DM Sure appearing on the screen. At the translation site, we also had a camcorder to record the translation activities, and DM Sure could also see our translation site.  Meanwhile, the translation site had another host, Mr. David Rounds, who is a seasoned hand in translation.  Two years ago, his group just finished the re-translation of Shurangama Sutra. 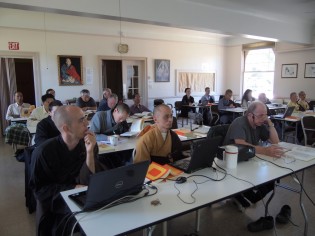 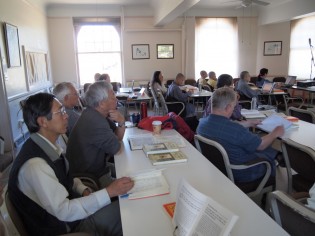 Due to the time zone differences, we adjusted our translation time to the early morning at 6:00 AM, which was 9:00 PM in Taiwan.  The translation was originally carried out in the Dharma Realm Buddhist University (DRBU) Conference Room.  Because of the frequent use, the translation personnel had to set up the room every time, preparing the books, audio system. Thereafter, they needed to put things back in order again. It was very inconvenient and tedious. After discussion, we decided on the 2nd floor Media Center of DBRU as our new translation site and started to work on it, remodeling, re-equipping it with projectors, screens, sound system, video recording system, and books—all the basic necessary tools were made ready and available.  On 27th of June, it was put to the trial and people were satisfied. 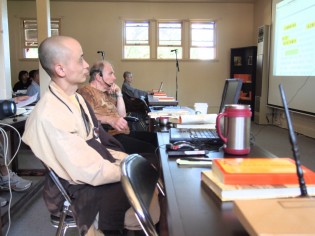 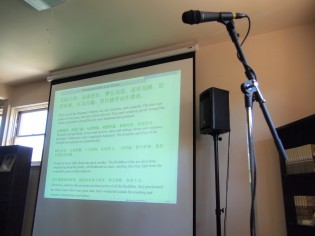 At the same time, DM Sure was leading the delegation on the European tour.  The first stop was in England, then onto the Netherlands, and the last two translation meetings were done through video conferencing from France.  The next stop would be Poland. Despite the busy schedule, DM Sure worked closely with Mr. Rounds and other team members who operated from the CTTB translation site, in order to ensure the translation project could be carried out smoothly.  When the meeting time came, DM Sure’s image would always show up on the screen warmly greeting each and every one walking into the room.  Sometimes he even made playful gestures to amuse all attendees. 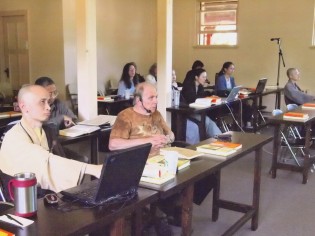 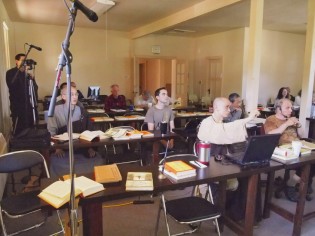 Although during the summer vacation many need to be away from CTTB, the translation project carried on with people participating via Skype. While the Avatamsaka translation site is only a few hundred square feet in size, but within the small manifests the vast—it allows people from faraway to be involved as if they never left.  Isn’t this a perfect manifestation of the Avatamsaka state?