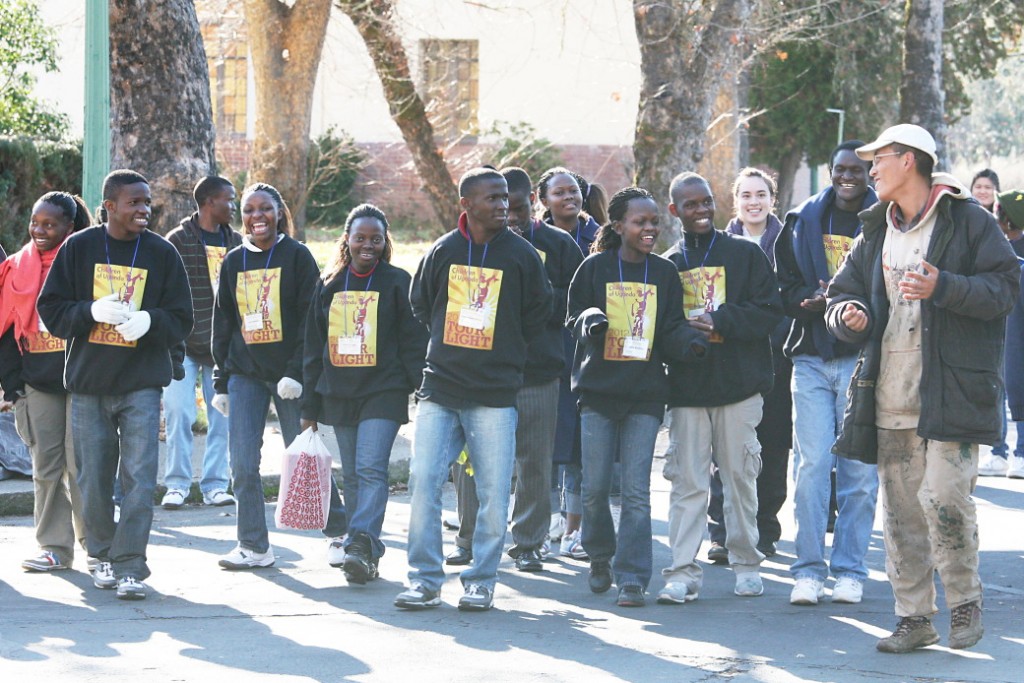 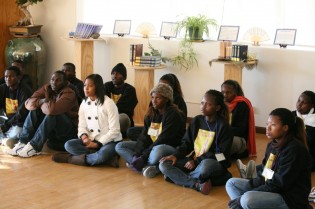 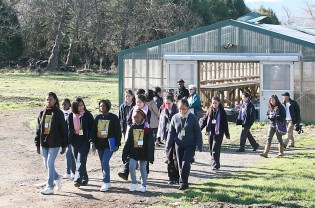 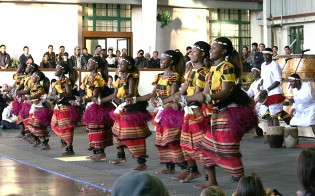 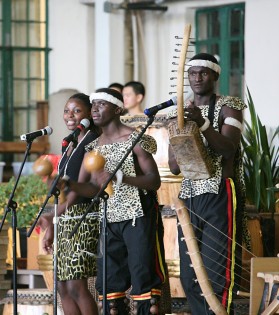 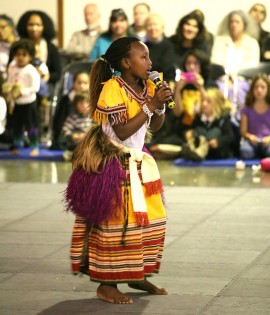 by Christine Chang (12th Grade of The Girls School)

When I was little, adults would often ask me what I wanted to be when I grow up. I would always stare at them with my eyes open widely and say, “I don’t know~”

Yet I think I have found the answer after eighteen years. 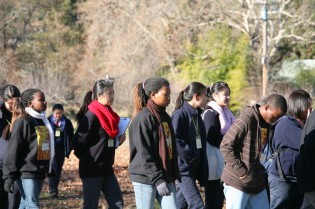 “They are here!” Alisha, who is also one of the friends who started the Uganda Project with me, ran to the Dining hall and yelled. “Didn’t Heng Yin Shr said that they will be late?” while thinking about this, I was already on my feet rushing to the office. While I was running toward my destination, my heart started to beat faster and faster. “Is this real? Did they really fly all the way here fromUganda? Does that mean that my dream has come true?”

When I stepped into the office, I saw a group of Ugandans. At that moment, I didn’t see them as strangers. It felt like they have been in my life with me for a long time… It felt like I knew them already. Then, I ran up to them and said hi to them. When I saw their smiles on their faces, I suddenly thought that everything in life seemed so worth it after living for eighteen years. 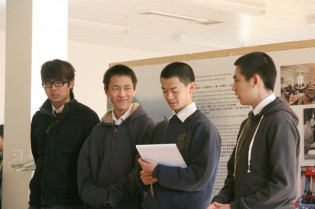 Next, the Girls Schoo land Boys School started to take turn to introduce City of ten thousand Buddhas, the history of Buddhism, and Venerable master. During the time, I looked at the Ugandans who were in the audience seats. Everything that our students were saying seemed to be so abstract and amazing to them, but those facts seemed to be so easy to for us to understand. Then, we went to the farm, then to the Buddha Hall. When we were walking to different places, I so happened to have the chance to talk to several of them. I realized that when we were chatting, there was no gap between us. I didn’t have to further elaborate on the things I was saying, because I knew that they completely understand me when I looked into their eyes. 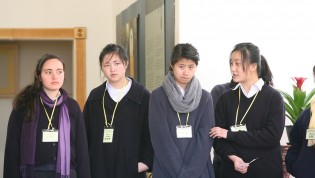 While we were eating lunch with the Ugandans, one of them called Constance started to mimic a star fromHollywood. While she was mimicking, every one of us were laughing so hard. Although we didn’t guess the person who she was mimicking right, we were just like a family when we were talking. We were able to say things without being judged or criticized.

After lunch, the Ugandans went to Chinese class. One of them called Jane Nanfuka, told me that she loved Chinese Calligraphy a lot, and she also liked to speak in Chinese. She couldn’t wait to go back toUgandato share these with her friends! When I was listening to her, my heart was warmed by her words. I felt that I was even closer to them because of their affections for Chinese culture. 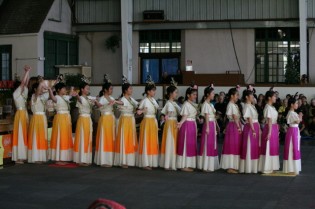 While the Ugandans were preparing for their performance, I talked to their executive director, Pamela. Throughout the whole conversation, I only remembered the times when we held onto each other hands and keep on saying thank you to each other. We didn’t know how we could express our “thanks” to each other. But at that time, I thought of the song “we are the world”. We, like what it is said in Buddhism, are ONE. We are ONE when we were all working toward a meaningful event, and the love in us became stronger. Once the people around us felt that power of love, they automatically will pass the care and love down to more people. 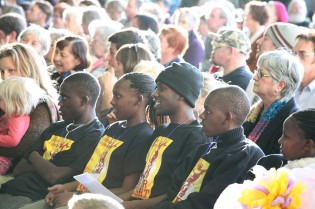 The beginning of the program was the spectacular performances given by the Boys school and Girls school students.  While enjoying in their performances, I looked at the Ugandan people’s faces. In their eyes, I saw a different world. BoysSchool’s twenty four season drumming, dragon dance, lion dace, andGirlsSchool’s Guanyin dance, Chinese sword dance, and tai chi dance were all such novel things in the Ugandan people’s eyes. After the intermission, it was the Ugandan people’s time to perform. When the dancers started to walk onto the stage, my eyes became teary. I remembered that my first acquaintance with them was because of their unfortunate background and heartbreaking stories. But that that moment, I saw the most confident, beautiful side of them on the stage. I was so touched by it. The way they present themselves was so brave and powerful. They were willing to put the “self” aside, and gave the audience the best performance they can. 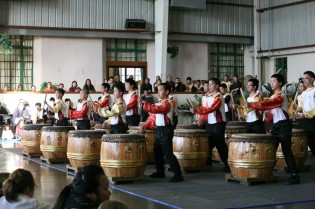 To me, I was just a normal high school student. I was so honored to see the confident side of them; I was so honored to have everyone to enjoy their performance with me. And at that instant, I told myself that I would devote my life to people who need me despite what kind of person I become or where I will be. Because, for me, my world will only have peace and harmony when I am helping the people around me.

As the performances came to an end, the Ugandans along with our students gather together to sing the final song “Seed to Sow.” The song was mainly describing how each one of us have a seed waiting for us to nurture, to care for, and to plant. This song also reminded me of the teaching of the Buddha; the dharma seed we all have in us. True, we all had a seed waiting for us to plant and to nurture it. At that time, I thought my seed has smiled and blossomed, because my seed is to let everyone to be together happily. And so I looked at my friends around me dancing along with the music as I also immerse myself into their music and dance moves. 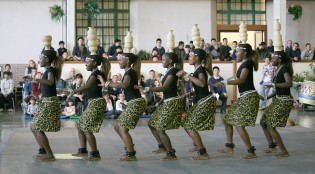 After the whole program ended, I ran up to their artistic director hugged him and said, “you guys were SOOOO great!!” Then, he held onto my hand without saying a word. The silence from him, at this moment, became a kind of encouragement to me, an encouragement along with the smile on his face told me that “I have done something right”. I looked into his eyes and thought, despite the hands in my hand were from a different races, we were able to make everything goes smoothly today was because of the team work from these different hands and different compassionate hearts. 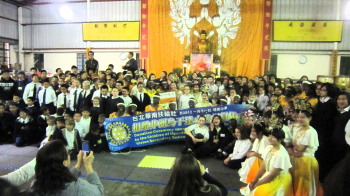 Until today, I still thought that everything seemed to be like a dream. And in this dream, everyone was able to walk toward a same goal, and to enjoy in the process due to everyone’s hard work and wills. I want to thank Heng Zhen Shr, Heng Yin Shr, Heng Zong Shr, Heng Dzu Shr, Jin Hong Shr, Jin Jr Shr, Jin Jing Shr, Dr. Yeh, Mrs. Yeh, Mr. Setera, and all other teachers who have helped in this event. Thank you teachers for the effort, support, and how you all inspire us to do good. It was the teachers who made this event happened. Thanks to all theGirlsSchoolstudents andBoysSchoolstudents for their good heart and hard work. This event will not be able to be so successful without everyone’s compassionate heart. 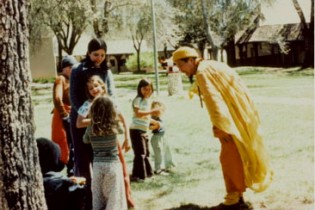 At last, I would want to thank Venerable Master Hua, who has always been the person who I looked up to. It is because of Venerable master hua’s vision of being selfless and the urge to promote education that make all this happen—he is the person who helped the most in the backstage. Because of Venerable Master Hua’s teaching, every one of us was able to put our little self aside, and put our best effort into something that is meaningful to all human beings; we were able to apply his teachings into our daily lives.