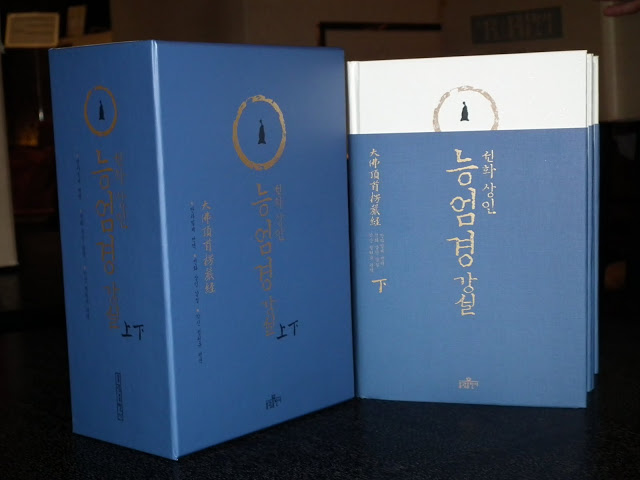 October 2, as the autumn air becomes crisp and the weather becomes pleasant, a new chapter of DRBA begins. Hopeful and enthusiastic, a group of 18 people including the Abbot of the City of Ten Thousand Buddhas, Dharma Master Heng Lyu, the head monastic of Dharma Realm Sagely Monastery at Kaohsiung, Taiwan, DM Heng Chiang, and many laity representatives of the Way-Places from the US and Taiwan, came together and met up at the Taoyuan International Airport in Taiwan to embark on one of the most reverent missions of DRBA; taking the legacy of Venerable Master Hua and extending it abroad to the peninsula of South Korea.

The effort was initiated by Mr. Zhen Yuankwei, a native Korean laity who a few years ago had inquired about publishing rights to print the Shurangama Sutra with Venerable Master Hua’s commentaries in his country. During my first meeting with him in Taipei, I learned that Mr. Zhen is indeed, not only passionate about the Chinese culture but also absolutely fluent in this ancient Asian language. 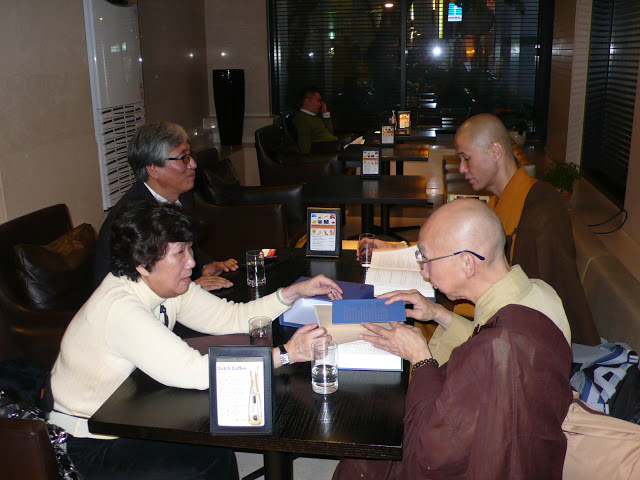 Currently serving as the chief administrator of a university, Mr. Zhen assumed an overseas position about a decade ago and relocated to Qingdao, a city of Shandong province of the eastern part of China where he stayed for seven years. There, at the Zhanshan Monastery he discovered for the first time the series of the Shurangama Sutra with Venerable Master Hua’s commentaries and has not put them down since. He even engaged himself to produce a new rendition in Korean in his own personal time. With countless revisions, updates, editing, and approximately three years later, the commentaries were completely translated. Mr. Zhen recalled: ‘Each day, I perform prostration 108 times to Venerable Master. He is my most revered person second only to Elderly Master Hsu Yun.’ With the work completely translated, Mr. Zhen’s next step was to find a publisher to make it into books.

Restricted by the proprietary copyright protections, Mr. Liu of the Foguan (Buddha Light) Publisher was unable to print Mr. Zhen’s work. But that decision can be reconsidered if Mr. Zhen can show proof of authorization for publication from DRBA. With that, Mr. Zhen immediately started the coordination effort and called for a meeting in Seoul with the lead members of DRBA, DM Yun, DM Jin Guo, a Korean interpreter, and myself to discuss and plan out the publishing activities in Korea. Determined to carry out the work and for the next several months, both sides relied on electronic correspondence to work out the final details. In September 2012, the Shurangama Sutra with commentaries finally saw the publication in Korean. 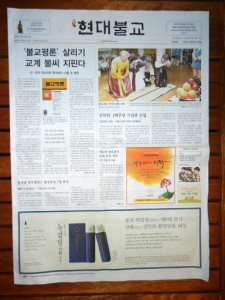 According to Mr. Liu, “This was Korea’s first official publication of the Venerable Master’s sutra commentaries in Korean language. Using appropriate means suited to individual abilities, Master Hua’s explanation does not just target the monks and nuns in the monastic community, it also addresses a much wider audience of all age. We believe his work would be very beneficial to the researching scholars of Buddhist philosophy.’ To mark the accomplishment and with DRBA’s participation, Mr, Liu hosted a special news conference to announce the release of the newly published Shurangama Sutra with commentary text. The same story was also featured on the three main Buddhist newspapers in Korea.

The publisher later invited DM Heng Lyu to tour the country’ top monasteries and broaden the affinities with book distribution events. Also on the agenda was an invitation by several Buddhist televised channels, requesting DM Heng Lyu to introduce Venerable Master Hua to the fellow Koreans and to speak on the fundamental doctrines of the Shurangama Sutra. Overall, it was a very fruitful trip and a great learning opportunity to appreciate Buddhism as it is being exercised and practiced on the land of the morning calm, Korea.