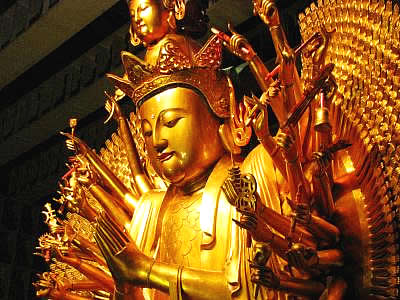 Buddhas, Bodhisattvas, Venerable Master, dharma masters and all good knowing advisors, Amitabha. Tonight is novice nun Jinlian’s turn to tie dharma affinities with the assembly. If there is anything I said not according with the dharma, please correct me.

Actually, every time when I sit on the stage, I always feel lack of self-confidence. Why? Being honest, CTTB is not a small place; however, it is also not a big place. Here, we live together, work together, and almost do everything together; everyday sooner or later we could meet one another. Therefore, we have already been planting the dharma affinities with everyone. Now sitting on the stage, I really do not know what to say. We often say only when writing can make you realize not reading enough; and only when sitting on the stage speaking the dharma, then I notice I really need more practice.

I am a very foolish person. Because of the sentence said by the world honored one “If a person, whether guilty or not, who has been put in stocks or bound with chains calls out the name of Guanshiyin Bodhisattva, his fetters will break apart and he will immediately be freed.” For a long time, I could not fully accept the universal doors chapter. Why? Because I feel the Guanyin Bodhisattva is very unfair. If a person is guilty, then he should be punished. Only innocent people should be rescued. Why this Bodhisattva would like to save them all? Calling out his name, then he would save them all, does this Bodhisattva addict to hear his own name? Then why the world horned one praises him in this way? I could not understand that.

One day I heard a very interesting story, very inspiring. It is talking about a father how to teach his two fighting boys. One day a father saw his two boys were fighting. He called them to come. One said:” Dad, that’s his fault, and he beat me.”  The father stared to the son:” You are right, then what. You are fighting so both of you should be punished. Go standing there.” These two boys had to stand. Five minutes later, the father called his younger son to come:” I know today you have no fault. Don’t think Dad is too old to tell the truth. Then do you know why you did not do anything wrong, I still punished you?” “Father, this is good.” “Don’t be flattery.” “No, I am not flattering, I recall last time when we fought, I did not know why at that time, you only punished elder brother, after that I was beat up by him badly.” “Why not tell me?” “It is better not tell you otherwise it would be even worse.” “Then what do you want me do?” “Just like this, standing there, then everything passed.”

After a while, the father called his elder son to come,” Today, whose fault?” “That is my fault.” “Did your younger boy do anything wrong?” “No, he is innocent.” “It looks you know that well.” “Of course, that is obvious.” “Then do you know why I also punished your younger brother too?” “Oh, that is because Dad you do not want me lose-face.” “Why I do not want you lose face!” ” ~~Because you want me to take good care of him in the future.”

Being honest, as a foolish person, I could not get the points of the conversations between the father and his sons in the first place. I do not know what they are talking about. But I feel it is very interesting. However, the more I recollect it, the more meaningful I feel about it. It is so wonderful. What is the principle of the father when he is dealing with his boys’ conflicts? If we use the common logic method: the right is right and wrong is wrong. Punishing the elder brother only, and let go the younger one, then probably in the future these two boys would be true enemies, and the family would split. The father uses the method that looks unfair, but the result is win-win. Is the rightness and wrongness that important to the father? Transcending the rightness and wrongness, what is the father really wants to tell his boys?

The one is infinitely many and the infinitely many are one. The great appears within the small, just as the small appears within the great. On the tip of a fine hair, magnificent Buddha-lands appear. Seated within each mote of dust, I turn the great wheel of the Dharma. What kind of state is that? What we can say is: that is really beyond our imagination. What are the real forms of beings that appearing in front of the eyes of Buddas and Bodisattvas? What are the true meanings of the words that the Buddhas and Boddisattvas spoke to us?  Analyzing and investigating the sutras, how then with our conscious minds possibly fathom the supreme awakening of the Thus-Come Ones? How could we gain the Buddha’s ability to know and to see merely by using the world’s words? I really do not know, I am totally confused…

Slowly, slowly, I become to understand that the world is not that simple as it is showing. And My stupidities are much more that I thought. Once, a teacher asked all of the novice nuns: what kind of monastic do you want to be, when you receive the full precepts. My answer is leaving home is the wisest decision I ever have made. And I hope at the end of my life I could proudly speak to myself:” I have no regrets in my life.” I really hope when, the lotus flower blooming, World-Honored One smiling to me, saying” How are you.” I am also smiling to him, saying:” Everything is OK.”