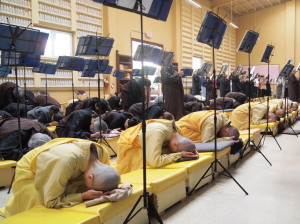 Venerable Master, Dharma Masters, and Buddhist friends: Amitabha! This is Heng Jiao, and would like to tie dharma affinity with everyone here. Today, I would like to talk about the Repentance of Dharma method.

Finding faults, recognizing faults and repenting of one’s faults are the steps of learning the Repentance of Dharma method. By following the text of repentance, we may find our own faults, after repent of our faults, and then we have to change our faults.

There is a saying, ordinary people only hear about their mistakes, the superior people make only few mistakes, and the sages have no mistake. Ordinary people can only hear about their faults but they don’t correct themselves honestly. Because superior people are able to correct themselves, so they can make only few mistakes. However, hearing about mistakes and making few mistakes are not yet the stage of sagehood yet. The sagehood requires no mistake.

Why do ordinary people only hear about their mistakes? Since long time ago, we have been doing things without recognizing them and take it as ordinary to point that we take what is wrong to be what is right. Our habits are not developed overnight, therefore if we wish to rectify our bad habits, then we have to really apply a quite bit effort to change. I believe everyone here has intention to do it, and hope everyone takes this good opportunity to repent our three kinds of karmic offenses by relying on the power of the Triple Jewels.

Last semester, when I taught Buddhist Study in our Developing Virtue Girl School. Among the ten unwholesome karma: including three evil offenses of body—killing, stealing, and sexual misconduct; four offenses of mouth—lying, frivolous talk, double tongue, and harsh speech; and three offenses of mind—greed, hatred, and delusion. I asked them, what are the most difficulties to you? I received one of their most difficulties is mouth karma. According to the Sutra In Forty-Two Sections Spoken By The Buddha, there are twenty different kinds of difficulties. One difficulty is not to gossip. For the most part, people enjoy gossiping. Indeed, to refrain from gossiping is a difficult thing to do. Not only do we need to proper restraints in our utterances, but also we have to purify our mouth karma.

Another time, I asked my class to write a paper of question and answer. The topic is “Imagine your funeral service…” My first question is whom do you expect them to come? The second one is what would you like them to do for you? My third question is in order to meet your expectation, how would you like to change or improve yourself?  In this article, almost everyone mentioned about they expect their family members, teachers, and classmates to come. Some of my Buddhist students mentioned that they would like to have people to recite the Buddha’s name as part of funeral service. The most important is that every student is very honest about what wrongdoing they have done, and they want to change themselves and expect to receive the forgiveness from others.

As the forgiveness, I have participated few times of the Catholic and Zen Dialogue, one priest shared his experience and said, he had observed several times that people were angry and holding hatred towards others when they passing away. He feels very sad and sorry for not being able to help them to release their emotion before their perished.

In the modern history, Gandhi is the former president of India. Before the independence of India, there was a serious conflict between Hindus and local Muslims. One Gandhi’s Hindu follower cried and asked for help from Gandhi. He told Gandhi that his son was killed by Muslim. Gandhi waited a second and responded that to adopt a Muslim orphan, and raise him with Muslim culture. I have mentioned earlier about the twenty difficulties. Another difficulty is that it is difficult to be insulted and not become angry. If someone maltreats you and puts you down, it is truly difficult not to get angry, to remain calm as if nothing happened. Not even to say if people take away the lives of our relatives.

Willing to repent and forgive are both necessary steps to walk on the path of Bodhi. Only rely on repentance, we may have no impediment. Once we have no impediment, we may feel peaceful and enjoyful.  On the other hand, only practice forgiveness, we may forget that resulted suffering. Without suffering, we gain liberation. We may liberate ourselves from suffering.  To forgive others is also to forgive ourselves. Why?  We are the result of our previous lives and we now are creating our personal and collective futures. We know that “what we do will shape what we become.” Only when we practice the Repentance of Dharma method will we be able to untie enmity and remove revenge/hatred. The Sutra text says, “If one had creates heavy offense. One should sincerely repent and never pass down the mistake. In such way, one will be free from one’s evil karmic retribution.

Practicing repentance enables one to augment and nourish all wholesome conducts. Subsequently, all the merits and virtues are developed.  In Buddhism, there are seven kinds of wholesome wealth.  In the Solid Faith Chapter in Dhamapada, it says, “The seven kinds of wealth are faith, moral precept, a sense of shame and remorse, erudition, giving and wisdom.  According to The Hundred Dharma Shastra, a sense of remorse and shame is also listed as one of the eleven wholesome dharmas.  Karma is created by the mind. Therefore, it must be eradicated from the mind.  In the Introduction manual of the 10,000 Buddhas Repentance, it begins with this passage, “If one wishes to become a sage, one must repent one’s karmic offenses. Only when one’s three types of karmic offenses are purified will one be able to tend toward the path of Enlightenment.

Before becoming a sage, everyone will make mistakes. The Commentary of the Tian Tai’s Four Modes of Teachings also indicates that repentance is the method for living beings to transform from the path of ordinary people to the Bodhisattva Stage of Equal Enlightenment, not only for ordinary people. It aims to admonish the people who have overwinning pride. Secondly, the bodhisattvas who have attained the stage of equal enlightenment are also required to practice repentance, because they still have a trace of ignorance, not to mention those people who have just resolve for Bodhi. If one doesn’t repent, then how one’s karmic obstacle and delusion could be eradicated and destroyed.

Today is the actual day of Shakamuni Buddha’s birthday. Shakamuni Buddha was born in Lady Maya’s right arm. After he was born, he raised his right arm and pointed to the heaven, he said, “Below the heaven and above the earth, I am the only Honored One.  All is suffering in the Three Realms, what happiness is there?” Not only does the Three Realms suffer, it becomes more and more suffering. Living beings are fragile and endangered, and the world in which we dwell is full of danger. In order to purify the world resulted from our collective retribution; we must first purify our body and mind. Only when we have cultivated our body, mouth and mind to wholesome perfection will the world be purified.

Today is the Buddha’s birthday. Also, we just began the 10,000 Buddhas Repentance. We may rely on the kindness and compassion of Shakamuni Buddha and 10,000 buddhas, to repent and bow sincerely.  We should emulate the Buddha and purify our body and mind. Moreover, we should pray for the sake of the world and all living beings. Hope we can mutually urge each other on.