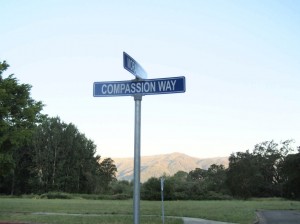 Buddhas, Bodhisattvas, the VM, DMs and all good knowing advisors: Amitabha.  Tonight is shramenerika QinJie Jinlian’s turn to tie dharma affinities with the assembly. During my talk, if there is anything that does not accord with the Dharma, please compassionately correct me.

I still vividly remember about 4 years ago my first Ten Thousand Repentance. Having lived in the CTTB for more than half a year, life was very peaceful and quiet. Suddenly one night when I stepped into the BH, I found the hall was already crammed with so many people that I could barely squeeze into it to do the evening recitation. The next day I asked one of my new friends about that. She told me that those people had come to participate in the TTR and this ceremony was always the biggest one during the whole year. People from different courtiers travel long distance, endure so much suffering and discomfort just to come here to bow ten thousand bows? That was really ridiculous to me.

I told her my thought. She laughed at me, saying:” are you afraid to bow the ten thousand bows in three weeks? That is really a tough task to many people. I could forgive you about that” “No, I am not afraid of bowing ten thousand times. Actually, before I took the 3 refuge and the five precepts, I had already bowed ten thousand times just in 2 weeks. So 3 weeks, ten thousand bows is really not a big deal to me. So, to me, the problem is I really could not understand why people would like to combine these two words: bowing and repentance together. Bowing is the simplest and most boring mechanical movement. On the other hand, repentance is the most profound and subtle mental movement.  How could these two be put together? Bowing is one thing, repentance is the other. How could they be connected to each other?”

Her smile slowly disappeared. She became very quiet. After a while, she slowly asked me a question: have you ever truly taken refuge under someone or some Buddha or Bodhisattva? Have you ever very sincerely, from your deep heart offer up your life to someone or some Buddha or Bodhisattva? This question made my hairs stand up like my biggest secret was widely opened. After a long time, I reluctantly told her:” no, never ever. From my deep mind, I never truly want to rely on someone. I was taught to be independent, I am independent. My head could be chopped off, my blood could be bleeding out, but I never surrender.” She smiled again and told me:” now you are a disciple of the Buddha, you took the refuge, and then why not take the opportunity during the TTR to find a Buddha whom you could truly offer your life to?” That is a good idea; I was very happy to accept her advice.

During that TTR, I very sincerely bowed to every Buddha, wanting to capture the true feeling of offering up my life. My favorite tune, literally translated from Chinese, was that from the deep bottom of my heart I am offering my life to bow to such and such a Buddha. Day after day, week after week passed, I was seeking. Then one day when I rose up from the cushion, the proctor recited the sutra saying if a good man or a good woman does not believe in this Buddha, this good man or good woman would definitely fall into the hells. Like throwing a stone into a pool, making thousands of waves; suddenly lots of voices appeared in my mind. One said:” Is that Buddha joking?  If not believing in him would make me fell into hells, then I won’t believe in him, I will go and see whether I would fall or not.” Then another cried, saying:” No, No, I don’t want to fall into the hells, no, no.”  The third voice said:” Don’t worry, quickly recite the next Buddha’s name, he says that whoever recites his name he could guarantee that that person will definitely attain Annutara-SAMYAK-Sambodhi. Hurry up, recite it, then we could counteract that previous one. Lots of other voices also were speaking. I was just standing there looking and listening to them. All at once, I saw many faces of myself. After so many bows, I know I did not find any Buddha to whom I could truly offer my life, but I know one thing for sure I am a true Chandala.

I wanted to run, to run away from the BH. I heard a sound hovering over my heart saying: you say you believe in Buddhism; you say you want to cultivate according with the Buddha’s teachings; then how come you do not even believe the Buddha’s words?  How come you want to argue with the Buddhas, to criticize the Buddha’s words? Yes, you are bowing but just physically, in your deep mind you are just calculating how much merit and virtue you could get from the bow, you never truly offer you life to Buddhas, and you just want to take advantage of them. You are a true thief.

From that day, I could not step into the BH anymore. There was always a sound criticizing me, laughing at me. I knew that was my karmic obstacle, but I could do nothing to change. Some strange condition made me believe Buddhism, probably, I thought I had used up my blessings; maybe it’s time for me to leave. However there was something in my heart that did not want to go, but I did not what that was. So every day I was just daydreaming, like a living corpse.

One day, at lunch time, like usual, in the dining hall we would play VM’s lecture. That day VM was using his soft voice talking about the ten Dharma Realms. He said our mind could make everything, it makes you go to the hells, and it also could make you go to heaven. And also it is our mind that could make you become a Buddha. All of a sudden, VM used a very sharp tone asked:” then what do you want to be? What are you waiting for?” That Lion Roar was like a Vajra Pestle directly stabbing into my heart. I felt tightness in my heart, a small bursting pain, but that was OK. I still could finish my lunch, still could continue my life.

However, after I finished my whole day’s work, sitting in front of the window of my room at night， VM’s words were still in my mind:” what do you want to be? What are you waiting for?” I want to be a good person; I want to be a Buddha, could I? I replied to VM, but I am a chandala. I have tremendous bad karma, could a person like me become a Buddha? Could I have a second chance? In the moon light, I was praying to the VM and the Buddha of the ten directions to forgive me and give me a second chance. The pain in my heart became unbearable. Leaning against the wall, I knelt down on the ground, but just when i touched the ground, I felt some very heavy thing fell off my shoulder. I started bowing and it made me feel released and at the same time very shameful, some warm liquid shed from my eyes. That vajar pestle slowly melted away. That night, I was praying, repenting and bowing…

What is compassion? After that night, I know a little bit of the meaning of compassion that is no matter how bad living beings are Buddhas and Bodhisattvas they would never ever leave them. They are always there waiting to help. If you could put down your arrogance, your ego, stretch out your hands to them, they would definitely hold them and give you a warm hug.

Bowing repentance only that simplest and most boring mechanical movement could calm down our monkey-mind, to make it focus. No matter whether it is three thousand times, ten thousand times or more, bowing makes a sound condition for us to be mindful of ourselves, to reflect upon ourselves. And only when we learn to reflect upon ourselves, can we slowly learn to repent. Bowing is some kind of quantitative change, while repentance is a qualitative change. Year after year, attending more and more repentance ceremonies, I could feel the power of bowing developing within me.

This is my personal experience about the ten thousand buddhas repentance. Hope that it could be helpful to your cultivation.

1 則迴響於《拜與懺微妙之聯繫 The Subtle Relationship between Bowing and Repentance》