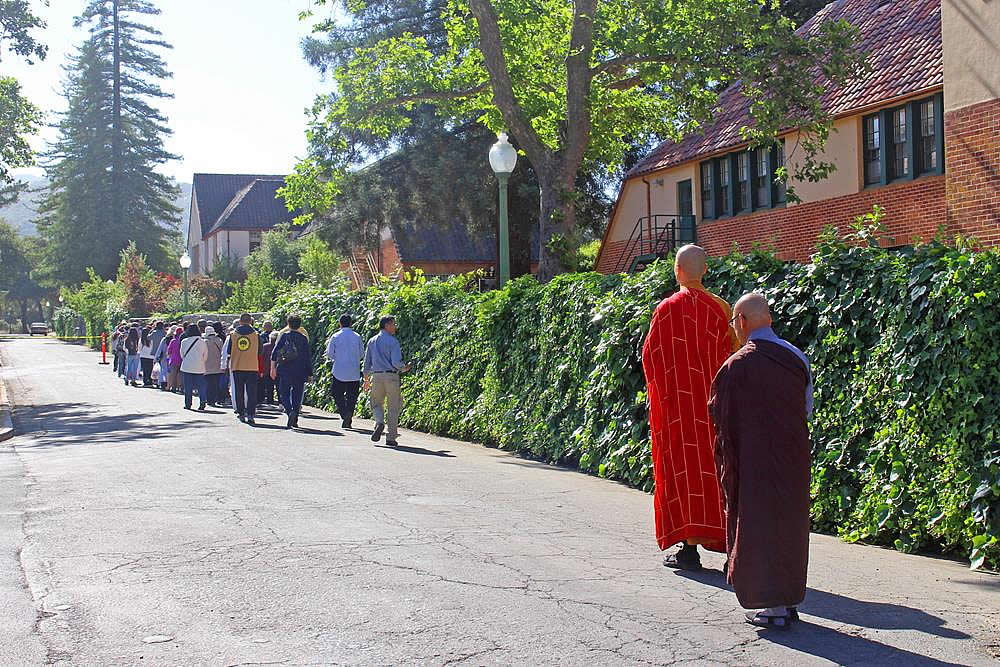 All Buddhas and Bodhisattvas, Venerable Master, All Dharma Masters, and all good knowing wise friends; good evening, Amitabha! This evening, it’s Qin Ken’s turn to tie Dharma affinities with everyone. If there’s anything I say that is not in accord with the Dharma, please be compassionate and correct me. This year is the 100th anniversary of the Venerable Master’s birth. In the last few months, many senior monastics and lay disciples have shared stories of affinities with the Venerable Master, and of his guidance and inspiration. Unfortunately, my blessings were insufficient, and it’s a real pity that even though I would frequently travel from San Francisco and Willis City, I never had the chance to enter the City of Ten Thousand Buddhas to meet the Venerable Master. Quite a pity!

Yesterday, the tenth day of the fifth month in the lunar calendar, was the 23rd anniversary of the Venerable Master’s Nirvana. Although I could not learn from the Venerable Master directly, since 2001 I have been connected to Gold Sage Monastery, Gold Mountain Monastery, The City of Ten Thousand Buddhas, and Blessings, Prosperity, and Longevity Monastery. I’ve benefited greatly through the teachings of many bhikshus and bhikshunis. Tonight I will share some of the affinities I’ve had with various branch monasteries and left-home people, and teachings and inspiration, which eventually led me to bring forth the Bodhi Mind and leave the home life.

In the year 2000, my wife and I were looking for a house in San Jose, but we couldn’t find a suitable one. Later through the blessings of the Buddhas and Bodhisattvas, we found a pre-sale house near Gold Sage Monastery. Due to the house’s proximity to Gold Sage, we immediately put an offer on the house and moved in in 2001. My wife was able to go to the Great Compassion Repentance every day, and the entire family could attend Dharma Assemblies, listen to the Buddha Dharma, work as a volunteer, and thus cultivate blessings and merit. In addition, my son could study Chinese and cultivate roots of goodness. We were really filled with Dharma joy.

From the year 2001 when we got to know about Gold Sage Monastery, my wife went to Gold Mountain Monastery to bow the Great Compassion Repentance, and on every Sunday we would to go to attend the Dharma assemblies, listen to Dharma lectures, and volunteer our service so as to accumulate some blessings. At that time I also visited many other Vietnamese temples, but I didn’t have as many affinities with said monasteries, and didn’t feel the same joy as a response. At Gold Sage Monastery, however, at DRBA Branches, whenever I attended the Great Compassion Repentance, or any other ceremony or Dharma lecture, I always felt that the chanting and praying was very familiar. It almost felt like returning home. On Sundays, when I listened to the monks and nuns selflessly speaking the Dharma — very often with a touch of inspiration and humor, I was greatly motivated to act in accordance to the Venerable Master’s and othe Dharma Masters’ teachings; to bring forth the Bodhi resolve and follow the Bodhisattva Path. I had the opportunity to take the Three Refuges, the Five Precepts, and the Lay Bodhisattva precepts.

Encouraged by the nuns in Gold Sage Monastery, my son and I took the Three Refuges in 2005. My entire family then took the Five Precepts in 2006; my wife and I both took the Bodhisattva Precepts in 2007. (This was the first transmission of Bodhisattva Precepts at CTTB ever since the Venerable Master entered Nirvana). This established some very important conditions in our cultivation of the Buddhadharma, and we could truly become disciples of the Buddha.

Every Sunday from 6am-7am, at Gold Sage Monastery, I’d bow from the Mountain Gate to the Patriarch Hall at Gold Sage, I did this for two years without interruption. Dharma Master Tsai would help unlock the gate and open the door to the Patriarch’s Hall. From 7am-8am we’d volunteer to clean Gold Sage Monastery, inside and outside. In this way the visitors who’d arrive at 8am for the ceremony would feel welcome, and feel happy to come to Gold Sage Monastery to cultivate together and benefit from the Dharma. The entire experience felt extremely special and excellent. I upheld such practices for two years. Also, because we lived so near, we were able to stay and help the Dharma Masters and laypeople to clean after the ceremonies. After the Dharma sessions, due to the close proximity, we were not in hurry to rush home, but stayed longer to help the monastics put things in order and clean up the place. Yesterday, the tenth day of the fifth month in the lunar calendar, was the 23rd anniversary of the Venerable Master’s Nirvana. Although I could not learn form the Venerable Master directly, since 2001 I have been connected to Gold Sage monastery, Gold Mountain Monastery, The City of Ten Thousand Buddhas, and Blessings, Prosperity, and Longevity Monastery. I’ve benefited greatly through the teachings of many Bhikshus and Bhikshunis. Tonight I will share some of the affinities I’ve had with various branch monasteries and left-home people, and teachings and inspiration, which eventually led me to bring forth the Bodhi Mind and leave the home life.

At the same time in 2007, when my son was nine years old, in order from him to have a good education and develop a good character, I applied for him to attend Instilling Goodness Elementary School for him. My wife also applied to CTTB to be a volunteer and take care of my son. But I stayed in San Jose to work up until 2010 when I gave up on making money on the outside and came to live in CTTB as a Building and Grounds volunteer. This was the turning point in my life.

I’ve obtained great benefit from having the privilege of listening to monks from CTTB lecture on the Shurangama Sutra at Gold Sage. As I would drive the Dharma Masters back and forth, I also was able to listen to individualized teachings, which were very useful. I really admired their cultivation. In 2009, I had the special opportunity to accompany some Dharma Masters for a month to go to visit three countries in Europe and learn from them at close quarters.

Now I’d like to explain the extraordinary manner in which I sold my home in San Jose. In 2001, we bought a house near the monastery. Later when causes and conditions matured, in 2010 we decided to move to CTTB permanently, However, if we still had our house in San Jose, we’d have to maintain it, or rent it to tenants and repair it frequently. This was inconvenient as the house was too far away. So I discussed this with my wife and decided to sell the house. When we made this decision, we were met with obstacles.

What happened exactly? In 2010 when we wanted to sell the house, the economy was in a slump, the housing supply exceeded the demand. In the housing market, buyers had many choices, and could pick and choose their prices. The worst would be that a house would be on the market for a long time without anyone interested in buying. But because I only wanted my entire family to go to CTTB to support the monastery, I didn’t think too much about this and simply prayed to the Buddhas and Bodhisattvas for their blessings/protection. The results were incredible. When I put the house up for sale, there were soon two buyers interested. We first chose the buyer from New York because he’d bid a higher prices, however later the buyer’s wife decided to give up on the purchase due to external factors and our hopes fell flat. Somehow, behind the scenes, the Venerable master had made the best arrangement for us. When the second buyer learned that the first one didn’t purchase, they decided to increase their bid to match the first bid, and the house was sold in just two weeks for a higher price than the estimated price given the market conditions.