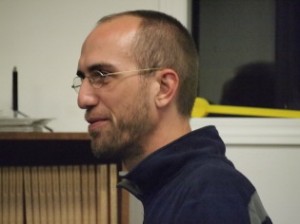 All Buddhas and Bodhisattvas, Dharma Masters and Dharma Friends, Amitabha.

For those of you who may not know me, my name is James Roberts, and my Dharma name is Chin Zhe ( 親哲 ). I was invited to practice speaking Dharma tonight — but since I’m not very skilled at speaking Dharma, I’m just going to tell you a story. Before I start, I’ll tell you one little bit of Dharma that I know; that for ordinary people like me who don’t have a lot of virtue or wisdom, it’s still possible, and very important, to cultivate good roots. So I thought I would tell a story about my coming to CTTB, and how that has helped create good roots in my life.

There have been two deaths in my family since I came to CTTB in December; my grandmother, my mother’s mother, passed away on Christmas morning, while I was at the Chan session. She had been hospitalized for years, her health gradually deteriorating in a natural way due to her old age. I decided to stay and finish the Chan session and miss her funeral. I’m still not sure if it was the best decision. Some of you are probably thinking now, “Of course that’s not a good decision, you’re being unfilial!” You might be right, but I want to ask you to listen to my whole story before coming to a conclusion. My thinking at the time was that it was more important for me to stay here at CTTB and cultivate than to be at home in person. After all, my brother was home in Maine, taking care of my mother, and he was always closer to her anyway, so I thought it would be a better for him support for her. This was a typical way for me to think about my family for most of my adult life, before I moved here to CTTB.

One thing that changed for me during that time is that I started calling my mother much more often. In the past, most of our phone conversations had felt very one-sided. My mother would usually call me, and in a very motherly way would ask about all the things that were happening in my life. I would answer her questions mostly because it was the easiest way to talk to her. After each call, I would rarely call her back, and usually we wouldn’t talk again until she made an effort to make contact again. In the back of my mind I always had an idea that this meant I wasn’t really being a good son, that somehow I wasn’t really appreciating my mother the way I was supposed to. I think in another way I still found a lot of her attention annoying, like a teenager who wants nothing else but to get out of the nest and finally be free. Even though I’d been fairly independent for many years, I had still not really let go of this attitude from my adolescent years.

So during the Chan session, after I had heard the news from my brother that my grandmother had passed away, I called my mother to see how she was doing, to see if she wanted to talk about anything, and just to listen to her. I think this phone call was a major turning point in my relationship with my mother, because it was perhaps the first time in my life that I reached out to my mother just listen to what she had to say.

About a month later, my stepfather, who had developed cancer over the previous year, was told by his doctor that the cancer had spread to his blood and he would certainly die. His health deteriorated rapidly. My mother decided to stop working to stay at home and take care of him, and I began calling to talk to her more and more often, again, really just listening to what she had to say. The more I called, the more I began to appreciate that I was developing a new kind of relationship with her, one that was much more supportive of her, but also one that I was benefiting from in an entirely new way. When I would call, I would only ask her about how things were for her, how my stepfather was doing, if she was getting all the support that she needed, if she was also taking care of herself. I also noticed that I was enjoying these conversations with my mother much more than I ever had with our old style of relating.

My stepfather passed away in March, and I went home this time, for several weeks, staying with just my mother in the house I grew up in. We went for walks together every day, and went shopping for food together. I cooked dinner every night (always vegetarian of course), she told me stories about what the past few months had been like, and thought about what she wanted to do in the future. I shared songs and chants with her that I’d learned at CTTB.

We found new common ground between Dharma Master Sure’s dharma songs and the peace loving songs that my mother knew from the 60s and 70s. Our relationship continued to change for the better, and in entirely new ways. I think this spring my mother and I finally learned how to become friends.

My stepfather’s body was cremated, and we had a small service at the church I had gone to when I was younger. I grew up attending the UnitarianChurchin Bangor, Maine, which is where my mother and my stepfather met. The church is very open minded, which affinity groups for Christianity, Judaism, Buddhism and Islam. Later that week my mother and I went to the Buddhist affinity group at the church, where we had a short mediation and discussion. In the evening my mother would sit and work on her Sudoku puzzles, while I did recitations for my stepfather.  Before bed, my mother and I would hug and say I love you to one another. I remembered when I was younger, when we used to have the same ritual, which somehow we had both forgotten during my adolescence.

Now that I’m back in the city, I often call my mother in the afternoon just to check in. I feel like I’m an important support person for her, and we are closer than we’ve been since I was very young. I’ve become much better at listening to her, and I find a lot of comfort in talking with her. Sometimes when I’m feeling uneasy I’ll call her just to listen to her talk, and I find that talking to her helps me feel more connected and grounded. It’s amazing how much has changed between us over the past few months.

I think somehow the conditions that came together, with losses in my family and my decision to move to CTTB, created a way for my mother and I to resolve some of our past karma. For me, being at CTTB allowed a lot more space for me to contemplate, without getting so caught up in my own concerns and worries, and with more space to listen and pay attention. At the same time, being near the Venerable Master’s eachings on filiality helped me think more about how I might be able to treat my mother differently. For me and my family, all of these conditions came together at the best time for me to return a little bit of the kindness of my mother.

I think one of the most important lessons I’ve learned from this, which is something I could never learn just from studying, is that when a person has the support of a caring community, it supports that person in taking better care of their own family–something that brings benefits to everyone. Amitabha.

1 則迴響於《親子關係的改變 Change in the Mother-Son Relationship》