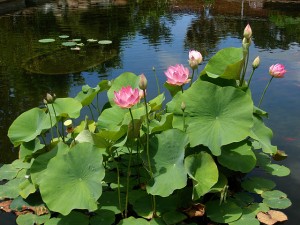 More than three thousand years ago, after Shakyamuni Buddha had practiced six years’ ascetic cultivation, he got enlightened. He realized the true principles in the world, but in the beginning he hesitated to teach these true principles. Why? Because he thought these principles were very deep and inconceivable, and so people might not be able to understand and accept them even if he tried to teach and explain those principles. Therefore, he was at that time intending to enter Nivarna, instead of teaching Dharma.

Just then, a Brahma Heaven god appeared in front of the Buddha, and said “Look at all these lotus flowers in the pool. Although some of them are still under the water, there are others that are out of the water and blossoming.” His meaning was: like lotus flowers, some people might not be able to understand the dharma, but there are other people who will be able to understand it. After that, the Buddha began to teach dharma.

The Buddha lectured sutras and spoke dharma for forty night years. The Buddha Speaks of Amitabha Sutra is very unique among the many other sutras, because the Buddha spoke this sutra without formal request. Even his great disciple Shariputra, who had obtained superior wisdom, still did not know how to ask for the Sutra. However, like many other great disciples, Shariputra and others who had deep good roots were able to build strong faith in Amitabha and his creation of the land of ultimate bliss right after they heard the Amitabha Sutra spoken by the Buddha.

This year is the forty ninth year since the Master came to the U.S.to propagate dharma. Next year will mark the 50th anniversary of his timeless teachings.  After our Master Hua came to the U.S. in the year of 1962, he patiently waited for past causes to ripen and bear their fruit. It took about six years. In the summer of 1968 the Master first lectured on the Surangama Sutra to a group of forty university students. Later, in the fall of 1969, he began to lecture on the Amitabha Sutra, from October 29th  to December 25th  at the Buddhist Lecture Hall inSan Francisco.

In addition to teaching adults, the Ven. Master also helped youths to learn Buddhism according to each one’s condition.  Many years ago, a six-year-old girl and her mom came to CTTB for summer camp. On the first and second day after their arrival, this girl cried a lot and asked to return toTaiwan. Her mom distressed and did not know how to deal with the situation. On the morning of the next day, this girl looked happy and told her mom that she is no longer thinking to go home. The mom didn’t quite understand, so she asked her daughter, why don’t you want to go home now? The girl said that she had a dream of the Master, and the Master took her to visit a very beautiful land with many lotus flowers. This girl was as happy as if she visitedDisneyLand.

After hearing this story, I always think I should learn to help young people to learn Buddhism as early as possible. So, I did this experiment on my niece who was five years old at that time. I wondered what I could say to interest and delight her. So, I tried to explain to her that the land of ultimate bliss has many lotus flowers of different colors. And the pools of the seven jewels, filled with the waters of eight meritorious virtues with a fountain that sprinkles all kinds of coca and soda water. I guess she got it, because she asked me if it also sprinkles yogurt drinks.

Compared to the timeline when the Buddha was in the world, more than three thousand years later, we are so fortunate to hear the Sutra again. Although we are not able to hear it from the Buddha directly, with the Master’s teaching and instruction set up many years ago, we are able to be here to study this Sutra and join the dharma assembly. I’m sure most of you who come and attend the assembly believe in what the Buddha said when he spoke the Amitabha Sutra. This is a good sign. Why? It’s because you all have planted the same good roots to deepen your faith in the Amitabha Sutra, like Shariputra and the Buddha’s other great disciples as described in the Sutra.

Cultivating Chan is to investigate the mind of the Buddha. Studying the teaching school is to propagate the Buddha’s teaching. Practicing Vinaya is to learn Buddha’s conduct.  However, cultivating the pure land dharma door is to enter the state of buddahood. The land of ultimate bliss is accomplished by Amitabha buddha’s meritorious virtues, and what has been accomplished is the pure and adorned world of proper retribution. On the other hand, this Saha world has appeared as retribution for our karma.  It has the sufferings of birth, aging, being ill, and experiencing death. These sufferings are helping us to remind the principle of impermanence.  We all know that life is uncertain, but death is certain. Our lifespans are very limited, and it is even more rare to cultivate and reach buddahood within this short lifespan. The Pure land dharma door is set up to help ordinary people continue their cultivation in the Buddha land after the end of their life, and eventually to end birth and death completely. Recitation of the name, “Amitabha Buddha” is called the medicine agada; agada means “medicine for not dying.” A single recitation of Amitabha Buddha is equivalent to one dose of agada; one thousand recitations of Amitabha Buddha is equivalent to one thousand doses of the “medicine for not dying”. If there is no death, that means there was no birth; without birth and death, one can certify to the state of non-birth.

If Dr. Emoto’s theory can be accepted in the scientific community, then I believe, in Buddhism, the power generated by reciting the buddha’s name goes even farther than it does. The meritorious virtues generated by reciting the buddha’s name cannot be understood easily using worldly language or intelligence, because this is not the state of ordinary people. I mentioned earlier that even Shariputa, with his great wisdom, had to depend on Buddha’s lecturing in order to understand thoroughly. If you often help to recite Buddha’s name when someone is passing away, you will notice that there is a significant change in the appearance of the deceased person before the recitation of the buddha’s name and after the Buddha’s name is recited. You can identify such a significant difference with your own eyes, and do not need a microscope.  Therefore, it is important to recite the buddha’s name especially when someone is passing away. Moreover, if we can help others to be born in the land of ultimate bliss, then we are also to helping others to accomplish buddhahood.

Since the Buddha has perfected all meritorious virtues, he is replete with the myriad virtuous qualities. Amitabha’s vows are equal and pure. They apply to all four kinds of birth and all six paths of rebirth. They pervade the ten dharma realms. Not only do ordinary beings recite amitabha’s name, all great bodhisattvas are also mindful of the Buddha, the dharma, and the sangha.  Therefore, not only is the land of ultimate bliss the land where sages dwell but it is also a home for ordinary beings. Amitabha Buddha does not just help ordinary people reach accomplishment within one single lifespan; in addition, they do not retreat in life after life, which is even harder.  If you can be reborn in the pure land, you will achieve the state of permanent irreversibility in your resolve for the way. This is what the Buddha called becoming avaivartika.

All the greatly virtuous ancient ones exhorted people to recite the Buddha’s name.  Of all the one thousand paths, or the 10,000 paths, only the path of reciting the Buddha’s name can cause one to be reborn in thePureLand.  Any person who cultivates can go there. If ten thousand people cultivate, those 10,000 people can go there. We contemporary people like efficiency. The Dharma-door of Buddha Recitation is the “fast track” to thePureLand. May you all will be full of Dharma joy throughout the holiday season!