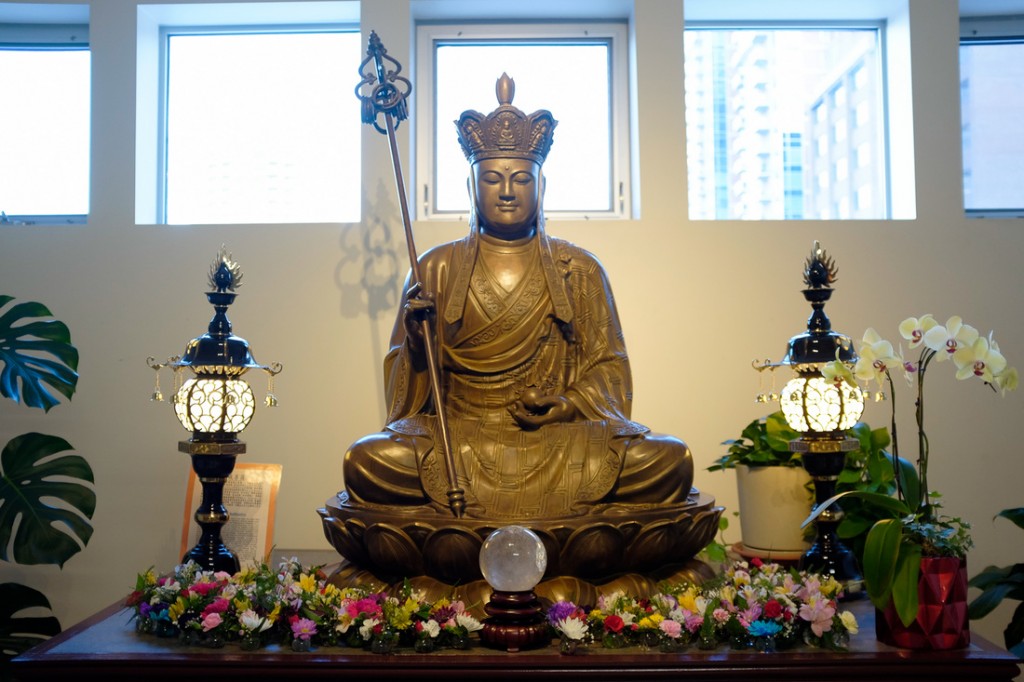 All Buddhas, Bodhisattvas, Venerable Master, all Dharma Masters and all dharma friends. Amitabha. Today, it is Shramenerika Jinben’s turn to practice tying affinity with the assembly. If I have said anything that does not accord with the Buddha’s teachings, please compassionately point it out to me.

Today I would like to start with a story told by the Buddha on the retribution of hell beings. At the end of the story, we’ll try to analyze the story using the topics we have recently learn from the evening lectures. Namely, we will analyze it with the ten suchnesses from the Dharma Lotus Flower Sutra and the ten habitual causes and six interacting retributions from Shurangama Sutra.

The following is a story from the Sutra of the hundred karma titled:  “The Tripitaka Master”: baseless slander resulting in falling into the relentless hell

One time, Venerable Maudgalyayana again went to the hells with his spiritual powers. He saw one hell being undergoing great suffering in the relentless hell. Through the manifestation of its own karma, the hell being sees the ground as a burning hot steel plate and its tongue is pulled out by a lot of people to be nailed to the ground. In an instant, its tongue and body engulf in flames and burned to ashes. Not long afterwards, it comes back to life again, its tongue is then cut into many small pieces. He cannot bear the pain and roll around continuously, screaming and wailing loudly. When Venerable Maudgalyayana saw it, he tried to enter into samadhi to contemplate the causes and condition of this hell being, However, his wisdom power was not enough to contemplate the causes and condition of all of its lifetimes. So he return to the City of Shravasti to ask the Buddha. When he saw the Buddha, he went up, bowed and asked the Buddha about the causes and condition of that hell being.

Venerable Maudgalyayana asked the Buddha again: “World Honored One, when will this hell being be liberated?”

The Buddha replied: “He has to wait until the Buddha Teacher of Proper Understanding to come into the world, only then he will regain a human boy. He will then leave the house-holder’s life under this Buddha, eventually attaining arhatship. When he attained arhatship, a lot of people will also slander and defame him. Because he slander an Arhat without basis, he will undergo defamation life after life.

At that time, all those who heard the Buddha’s teachings on living beings’ causes and retribution gave rise to repulsion towards transmigration and developed faith on the principle of causes and retribution. At that time, the Buddha saw that many people at the assembly qualified as Dharma vessels and transmitted expedient Dharma. When they heard the Dharma, many people attained fruition.

The Tripitaka Master possesses the mind of jealousy and hatred, fulfilling the suchness of causes.

The Tripitaka Master resorted to spreading rumors everywhere, he slandered the Bhikshu without any basis, lying about how the Bhikshu broke the fundamental precepts, he claimed the Bhikshu Arhat was not practicing the Buddhadharma, but upheld deviant ways instead. He told people not to take refuge with the Bhikshu Arhat, Fulfilling the suchness of condition..

The suchness of the effects. The Venerable Master explains that to start out on a course of action is called the cause. If you do something, at the very beginning it is a cause. When the matter has been successfully completed, the completed matter is the effect.

The Tripitaka Master fell into the relentless hell after he died, fulfilling the suchness of effect.

【如是報】上人的解釋是：報，是報應，也就是果報；你造什麼業，就受什麼報。那麼「報」和「果」又有什麼分別？在果的時候，還沒有受報；等長成了，把那個果又破壞了，就受報應。也就是你結了惡果，當正在結果的時候，還沒有受報；等過了這個果，然後就該受報應了。怎麼叫果？好像我們現在造種種的惡業，墮地獄了，這是得一個地獄的果；那麼地獄又有種種的刑罰，我們要去受這種刑罰的處分──處分就是罰，受罰了！譬如罰你墮油鍋地獄，在沒有到油鍋裏邊，這是個「果」；已經到油鍋裏邊了，那是個「報」，受那種痛苦了！
The suchness of retributions. The Venerable Master explains that retribution is the complex of effects incurred as a result of the karma you have created. According to the type of karma you create, you undergo just that kind of retribution.What is the difference, then, between the effect and the retribution? The effect takes place before the retribution is undergone. It is the immediate consequence. One undergoes retribution when the effects have been broken through and one receives recompense. If you planted an evil cause, you reap the effect. Later, you receive the retribution. What is meant by the effect? If we create all kinds of evil karma and fall into hell, that is the attainment of the effect of hell. For example, if you are sentenced to the hell of boiling oil, before you are put in the pot of boiling oil, that is the effect. Once you are in the pot, you are undergoing retribution. Receiving the torments of hell is retribution.

The hell being sees the ground as a burning hot steel plate and its tongue is pulled out by a lot of people to be nailed to the ground. In an instant, its tongue and body engulf in flames and burned to ashes. Not long afterwards, it comes back to life again, its tongue is then cut into many small pieces. He cannot bear the pain and roll around continuously, screaming and wailing loudly. Fulfilling the suchness of retribution.

Next, we’ll analyze the story with the principals of ten habitual causes and six interacting retributions from the Shurangama Sutra.

Sutra: “The ninth consists of the habits of injustice and their interconnected support of one another; they result in instigating false charges and libeling. From them are produced crushing between mountains, crushing between rocks, stone rollers, stone grinders, plowing, and pulverizing. It is like a slanderous villain who engages in persecuting good people unjustly.”

The Venerable Master explains that stone rollers is another hell, as are stone grinders, plowing, and pulverizing. If a person is a constant liar and bears false witness, if his speech is totally unreliable, then in this hell his tongue is cut out. Or it is grappled with an iron hook and pulled out, and then oxen drag plows back and forth across it.

The Tripitaka Master has the habit of injustice, therefore when he fell into the hells, his tongue was pulled out and nailed to the ground.

Sutra: “The fifth is the retribution of touching, which beckons one and leads one to evil ends.” “There, it is aware of two sensations. One is touch that involves coming together, in which mountains come together to squeeze its body until its flesh, bones, and blood are totally dispersed. The other is touch that involves separation, in which knives and swords attack the body, ripping the heart and liver to shreds.”

I would like to end here with a quote from Avatamsaka Sutra’s Transcending the World Chapter: