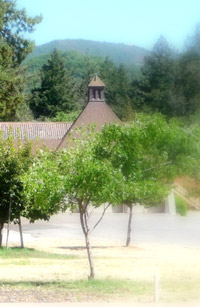 Venerable Master, Buddhas, Bodhisattvas, Dharma Masters and all Dharma Friends…this is Jin kai, here to practice speaking to the Assembly. Please kindly excuse any errors, and anything said that doesn’t accord with the dharma.

As I watched the recent leaving home ceremony here in the Buddha hall, I recalled my own leaving the householder’s life and entering monastic life. I remember feeling somewhat surprised that I would be even considered as a possible candidate for monastic life, I was such a newcomer, and didn’t know anything at all about Buddhism.

I had come to CTTB in 2002 to study Buddhism and to do volunteer work. After a “change of heart” about working  for the US Peace Corps as a volunteer teacher in South America.

When I first encountered Venerable Master’s teachings, through my good friend, I was overcome with joy, and an over-riding urgency to learn more of his teachings. So as I perused the Dharma talk books, I was delighted when I came upon a listing of the various DRBA monasteries.

I was instantly drawn to Malaysia, and spent the next 2 days trying to telephone a monastery listed in Kuala Lumpur…but to no avail…I kept getting a recording stating  that the telephone circuits were down, and that no calls were going through to Kualua Lumpur. Then I was somehow directed to telephone CTTB instead, to try my luck… (.maybe this sentence is too vague…I can alter it if needs be!!!)  Things went smoothly, and within a few months I arrived at CTTB full of hopes of learning Buddhism…of studying for a year, and then after a year, returning to the world of work and whatever else awaited me.

Much to my surprise, the year came and went, and I had no desire to leave the City of 10,000 Buddhas…quite the contrary….I had a tremendous urge to enter the monastic life…which only increased with each visit I took to the Buddha hall.  I didn’t understand the origin of such a powerful wanting to become a nun…I tried to ignore it, suppress it, but the momentum was so very powerful…”this wasn’t part of my plan,”  I thought…where is this feeling coming from, what’s going on here???…I wanted to understand what was happening  and the origin of this “larger-than-life”, newfound idea/feeling. So I went to explain my situation to  2 of the nuns, to try to get some clarity on the situation. After all, I knew nothing at all about Buddhism, nothing about monastic life, and nothing about the world of the monastery.

The nuns, understanding my naiveté, kindly explained that many people who enter monastic life, usually make vows in past lives to return as monks or nuns. I had always thought that vows were something which Catholic or Anglican Priests took before committing to the clergy. Never before had I heard of “past life” vows, and  was baffled, but relieved by their words and their explanation.

This intense feeling of wanting to leave the householder’s life continued to gain momentum, but what had originally seemed like a raging , tumultuous current, now felt calm and peaceful.  I had finally begun to experience some relief.

One evening as I sat in the Buddha hall during the evening lecture  with the Dharma Lotus Flower sutra in hand, my mind became preoccupied, and drifted away from the dharma lecture. While the Dharma Host was lecturing  the  Dharma Lotus Flower Sutra, my head became filled with thoughts of the many things that I needed to accomplish, before I could leave the home life. I began thinking that I needed to postpone becoming a nun…”so many things that I needed to get done, and there was not enough time..so I’d better wait until the next opportunity to leave home” I thought. As I nonchalantly opened the sutra, my eyes fell on Master Hua’s words “if you have the opportunity to leave the home life, you should take hold of that opportunity immediately” were the words on the page in front of me .

I immediately closed the sutra and reopened it randomly to another section, but again my eyes fell instantly on Master Hua’s commentary… “You may not have another opportunity to leave the home life again, if you postpone it now” I thought “how coincidental”, it was as if I was having a silent conversation with the sutra in my hand.

So again, for the  third time I closed the sutra, and made sure to reopen it to a distinctively different section, and sure enough there were Master Hua’s words again “ Not only might you lose the opportunity in this lifetime” His commentary said, “but you might not have the chance to leave the home life in future lives” this went on for  at least 3 or 4 times, with me randomly opening the Lotus sutra, and  each time  getting a stronger and stronger message about leaving the householder’s life……..at this point, I realized that this was not mere coincidence, but that I was receiving a strong message.

I trusted the Venerable Master’s guidance for my life, and immediately abandoned my original thoughts of postponement of any kind. In retrospect, I now realize how foolish I was, in treating such a profoundly important matter with such simple-minded naiveté.

That was in the Fall of 2005…. time has passed and I feel still a beginner, with so much to learn about the Buddha dharma, that I’ll need a few more lifetimes to gain any  level of competency. Anyhow, in the meantime, I’ll  just do the best that I can, and try to be as mindful as possible, which is often a struggle for me.

One of the practices that I began in recent months, and which has  been helpful in bringing me inner balance, is daily recitation of the Universal Door Chapter/Pu Men Pin. I wholeheartedly agree with the Dharma Speaker of last Saturday, who said that daily recitation of the Universal Door Chapter helped to calm inner worry and anxiety, and which brought benefit and peace to his family during Chile’s major earthquake over a year ago.

I have been reciting the Universal Door Chapter, in the morning, and again in the evening before retiring… it helps to greatly pacify my mind, and although I recite it quickly in English in the interest of time, I really appreciate the melodious Chinese version.

Last summer before my grandmother passed away, she was having a very difficult time “letting go”.  She felt as if she was being tortured, and she would tell me in Creole, that she had many invisible visitors, many of whom she felt were torturing her.  Her cries were agonizing, and her weeping and wailing could be heard from a distance.  However after my aunt placed the Great Compassion Mantra recitation recorder in her room, she quieted down immensely, and passed away within two weeks.

I’m happy to see my family’s acceptance of the Buddhadharma increasing and growing, although they practice various Christian traditions. Years ago, after my mother returned home to the east coast, after visiting me here at CTTB, she told me how healthy she felt after eating pure vegetarian food during her stay here. At the same time my younger sister had been diagnosed with diabetes, and we were all worried about her.

Earlier that week, I had read a story in Vajra Bodhi Sea, in which a mother prayed to Gwan Yin Bodhisattva to restore her child’s health, and vowed to be a lifelong vegetarian in return.  I told my mom this story, and asked her if she wanted to do the same/ to pray to Gwan Yin Bodhisattva to  heal Marjorie of diabetes, and to promise to be a life -long vegetarian, in return.  I told her that I wasn’t sure if it would work…it might not work, but if she wanted to, she could just experiment, to see what happens. She agreed to do this…to prayerfully request Gwan Yin Bodhisattva to help my sister to recover from diabetes ….and to continue to eat only vegetarian food.

A month later, when my sister went for her medical check-up, the doctors apologized, said there was some mistakes, and that current test results showed that she had no signs of diabetes.

I think that my Mum believed the doctors, that they made a mistake in their diagnosis. I too was skeptical at first, but as time goes by, I have heard  so many inspiring and magical testimonials/stories of people receiving miraculous help, and I often wonder “did the doctors actually make a mistaken diagnosis, or did Gwan Yin Bodhisattva answer a Mother’s heartfelt plea”?
Amitofo!